Although they're already eating greenery since they're 2 weeks old, mamma's milk is still the best!
She only 'endures' it for a few minutes at a time though and than she kicks and basically walks half over them to end it. Enough already! 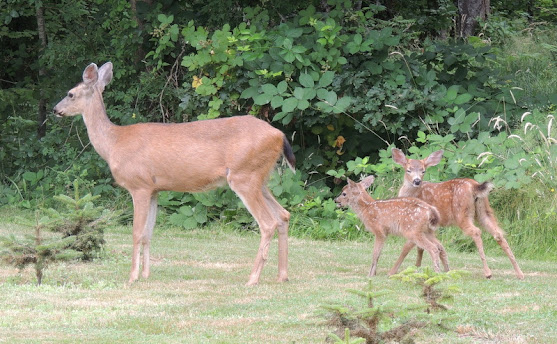 I'm so glad to still see them all together and looking healthy and happy!
So many are hit by cars these days ..

Despite the heat we actually had a few things on our agenda this week. Last weekend we joined Doug and Brenda and a few of their friends and went to a charity event at one of the local vineyards, the Stoller Family Estate Winery. 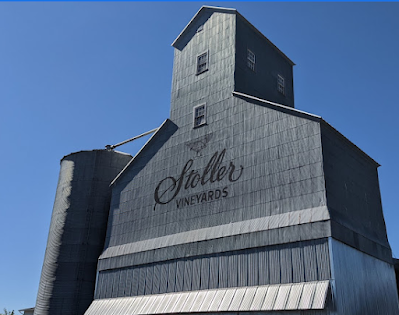 This event, 'Harmony in the Vinyard', is the largest fundraiser for the Aaron Meyer School of Concert Rock, created to inspire young people with the love of music, through education and opportunity.

It had been an incredible hot day, around 98F (34F), and had not cooled of much when we arrived at the vineyard around 6.30pm.
Fortunately I'd brought a hat and thin blouse since we were all sitting in the full sun on a grassy slope in front of the stage. 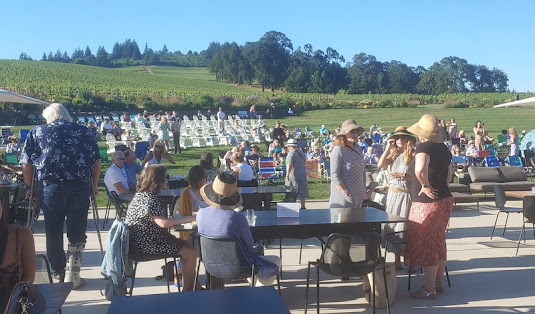 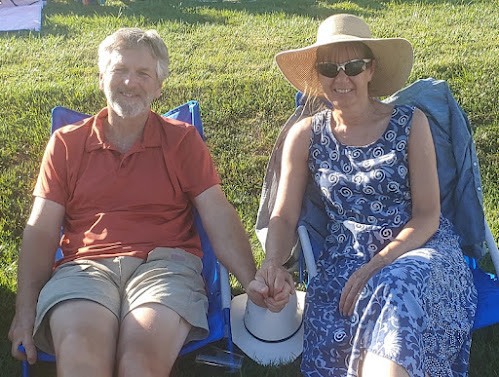 Aaron Meyer, the lead violinist of a 10 man band started on a strictly classical path, but "has blazed a trail that is uniquely his own, blending classic roots with rock influences in a style he describes as “concert rock violin.”
This evening included everything from a dynamic rendition of Vivaldi's 'The Four Seasons' to his amazing versions of Pink Floyd's 'Comfortably Numb', Led Zeppelin's 'Kashmir', Queen's 'Bohemian Rhapsody', The Eagles' 'Hotel California', Dire Strait's 'Sultan's of Swing', and the Beatles classic 'Let it Be'. 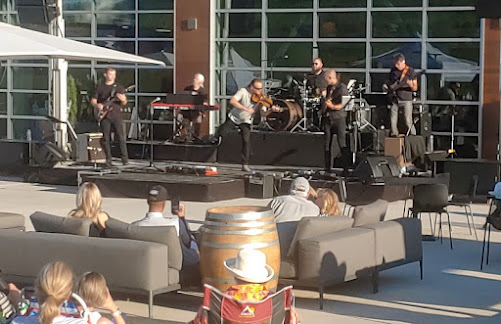 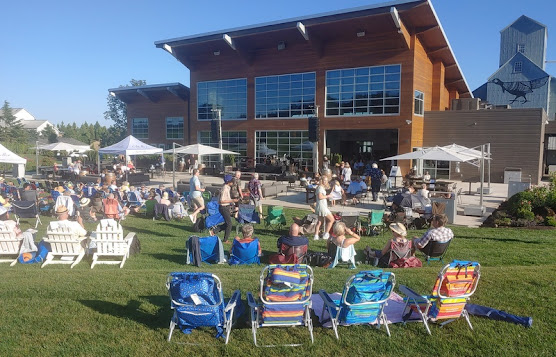 Of course there was wine as well! We enjoyed a nice bottle of Pinot Noir and some of us tried 'Stoller Swing', a blend of Oregon Rosé, Oregon Vermouth, some 'spritz' or bubbles and ice and lime.
Too much alcohol for me, but apparently it was very nice. 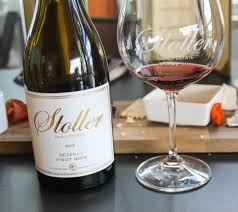 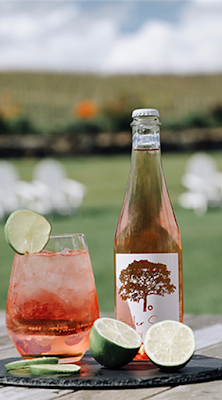 Aaron's love for young people and education inspired him to create his unique music educational programs, which continually reach students worldwide.
Each year, he visits dozens of schools all over the Pacific Northwest and around the world, presenting assembly-style educational music programs, holding workshops and assisting in the creation of CDs of student-written songs. 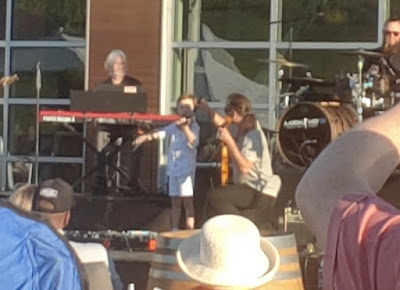 Some of his Oregon students performed that evening, among whom this 6 year old boy who first performed 'Twinkle, twinkle, little star' all by himself and was than joined by the band for a great rocking version at his second time around!

After a week of more scorching temperatures during which James golfed in a club-tournament (!), Newberg celebrated it's Old Fashioned Festival this weekend: 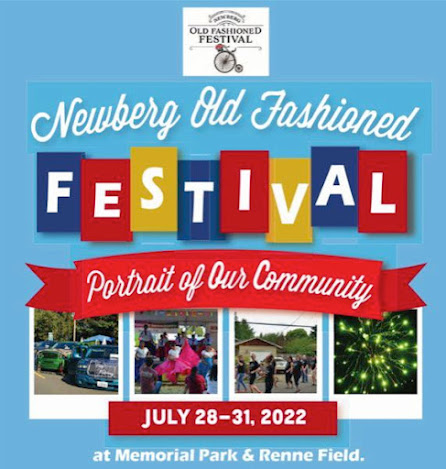 As usual during these sort of events (as we have learned during our travels through the country) there was a car-show: 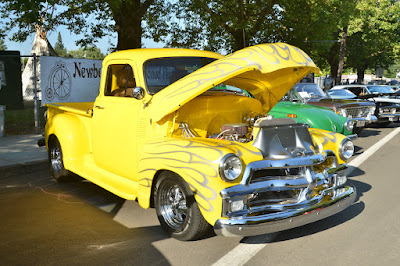 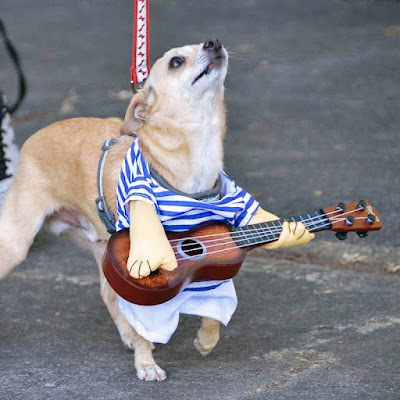 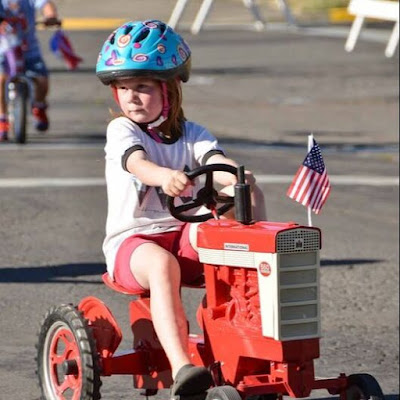 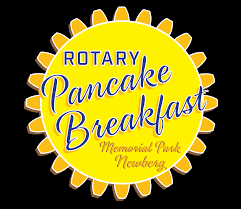 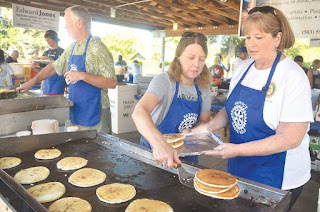 Which was the place from where to watch the 'Grand Parade, while munching on your pancakes: 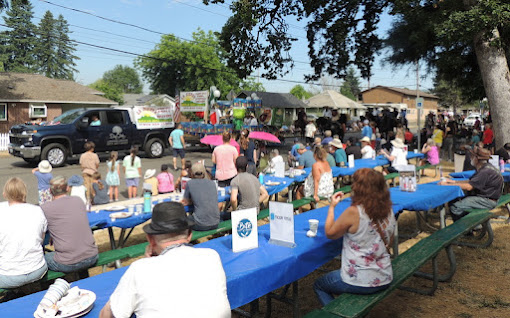 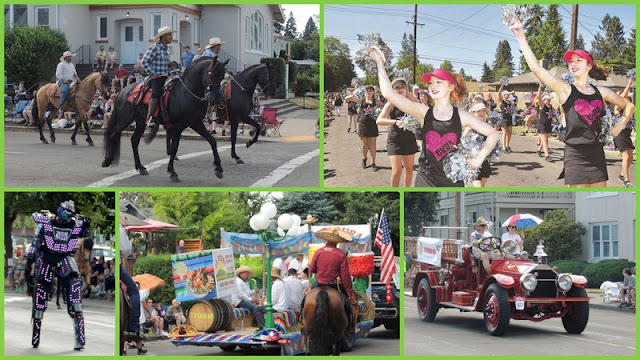 The streets were lined with people and I have to admit every now and then it flashed through my mind that these are the events where some of the horrible mass-shootings are happening these days .. 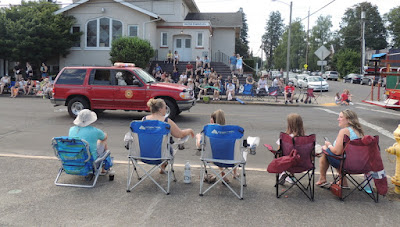 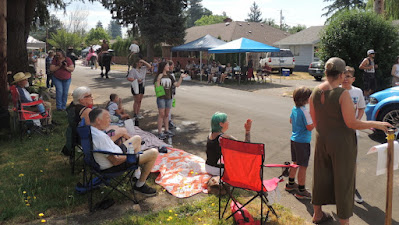 Like all of us, those people that died never thought it could happen in their own little town ..
Sigh .. what's there to do .. well, like one of my favorite fellow bloggers always says .. VOTE and vote BLUE!

OK, nothing much comes to mind to end with after that, it all seems rather insignificant and shallow .. but here's a pretty sunset.

Posted by James and Brigitta at 3:49 PM